This Christian place of worship has existed continuously in what is today Tasmajdan Park from the nineteenth century. It is located in the vicinity of the city center near the building of the National Assembly. St.Mark’s church dominates the area of Tasmajdan and it adorns the city park of Tasmajdan. The area itself, including the park and the church has a long history and is a very picturesque landmark to visit during your Belgrade tour. The Tasmajdan Park was recently renovated and had changed a lot comparing to its original appearance, but the St.Mark’s church had remained unchanged.

The original St. Mark's Church was built in the 1830s and it stood in almost the same location, just slightly south of the present building. The old St. Mark's Church was a rectangular building. It was built at the traditional place of worship as the graveyard church. Because it was located in a cemetery, as is often the case, the cemetery was taken care of by the church administration. There was a quarry of rock (and saltpeter) in Tasmajdan that was also in use in the time of the Turks and later to build many edifices in the present-day Belgrade. According to accounts by contemporaries, before St. Mark's Church was actually built a cross was placed on that spot and a shade tent where Holy Liturgy and religious processions in today’s municipality of Palilula were held.

In about 1870 St. Mark's Church had two parishes, that of Terazije with 312 homes and Palilula with 318 homes. During World War I the Austrian conquerors restored the church in 1917. The original church existed until the beginning of World War II.

Because of the rapid growth of the city and the increase in the number of residents, it became necessary by the beginning of the twentieth century to build a bigger church in the Belgrade quarter of Palilula. Frequent wars did not allow this until 1930 when a pair of Belgrade architects, the brothers Petar and Branko Krstić, both professors of the University of Belgrade- Faculty of Architecture, designed the plans for the new St. Mark's Church.

The new church foundation was placed on May 8th 1931. The requirements of the competition for the drafts of the new church building that brother’s Krstic had won were not easy because it was requested that the new church should resemble Monastery Gracanica located in Kosovo which was not easy to accomplish with the contemporary design methods. The differences between the “model” and the “copy” are visible in size, proportion and forms. The architects had preserved the memory of Gracanica Monastery but had realized their own ideas. Of course, the dimensions of the church are much larger and everything appears grand and powerful. The external walls are in two colors of natural materials in the Serbian-Byzantine architectural style. This church is a good example of how beautiful old spiritual models fashioned with new building materials can appear in an urban setting without losing anything of their authenticity and simplicity.

The church, dedicated to Holy Apostle and Evangelist Mark is one of the largest churches in the country. Adjacent to St.Mark’s church is the smaller Russian Orthodox Church – The temple of Holy Trinity. 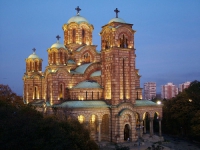